Francisco de Goya was a Spanish romanticist painter who worked primarily for nobles and the royal family in Spain. Goya was born in March 1746 and died in April 1828 at the old age of 82. In the latter part of the 1700s and the early part of the 19th century, Goya was regarded as the most crucial artist in Europe, a reference point of sorts. 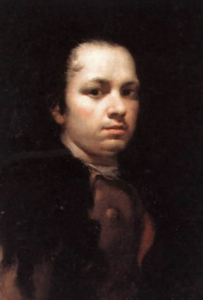 Learning about Francisco de Goya is something that every young artist in the 19th and 20th centuries had to do. Francisco Goya had a significant influence on many artists and painters that came in the generation after him, and his body of work set the foundation for substantial later artists.

Francisco Goya was described as a guarded man who never really spoke about his personal opinions and thoughts. In 1746, in Fuendetodos, Aragon, Goya was born to a middle-class family. From 14, he studied painting with José Luzán y Martinez before moving to Madrid to study under Anton Raphael Mengs. In 1773, he tied the knot with Josefa Bayeu.

Though the rumors of Goya’s rebellious temperament and violent activities are unfounded, he was a revolutionary artist. His work included paintings, sketches, and engravings on different topics that reflected the political and social changes of his time.

King Charles III’s favorite, the Count of Floridablanca, commissioned Goya to paint his portrait in 1783. He befriended the King’s half-brother Luis and spent two summers painting pictures of the Infante and his family. In the 1780s, his circle of patrons expanded to include the Duke and Duchess of Osuna, the King, and other significant figures from the kingdom he painted. Goya was hired as a painter for Charles III in 1786.

In 1789, Charles IV appointed Goya as his court painter. He was promoted to First Court Painter the following year, earning 50,000 reales per year with a coach allowance of 500 ducats. He created portraits of the King and Queen of Spain, along with the Spanish Prime Minister, as well as several other aristocrats. This painting by artist Francisco shows little flattery toward the subjects; Goya’s painting of Charles IV of Spain and His Family is especially unkind to the royal family.

The painting is seen as amusing by modern interpreters. Some people think it reflects the corruption that surrounded Charles IV’s reign. His wife was supposed to wield actual influence during his rule. In the painting, Goya put her in the middle of the group portrait, where she looks like a queen. The artist can be seen peering out at the audience from the back left of the painting. In contrast, the painting behind the family represents Lot and his daughters, reinforcing the underlying idea of corruption and decay.

In 1801 he completed a commission painting of Godoy to mark the triumph over Portugal in the short War of the Oranges. Even if Goya’s 1801 image is widely regarded as sarcasm, the two were friends. Even after Godoy’s tragic downfall, the politician praised the artist. Godoy regarded himself as a critical figure in Caprichos’ publication, and it is usually assumed that he commissioned La Maja Desnuda.

In 1793, he became deaf due to a severe and unknown illness, and his art became darker and pessimistic. In contrast to his social ascent, his later easel and mural paintings, prints, and sketches portray a dismal attitude on personal, social, and political levels. In 1795, the year Manuel Godoy signed an unfavorable treaty with France, he was appointed Director of the Royal Academy.

In 1824, Francisco Goya was given permission to travel to France for health reasons after the failure of an attempt to build a liberal government resulted in increased persecution. After visiting Paris, he went into voluntary exile in Bordeaux, where he lived until he died in 1828, except for a brief journey to Madrid. Despite his age and infirmity, he continued to paint, draw, and employ the novel lithography method he had learned in Spain to record his impressions of the world around him.

His last paintings include genre subjects and portraits of exiled friends Don Juan Bautista de Muguiro, Leandro Fernández de Moratín, and Don José Po de Molina. It demonstrates the final evolution of his style toward a fusion of form and character in terms of light and shade, without silhouette or detail, and with a minimum of color.

Goya transitioned from merry and joyous to intensely pessimistic and sad during his long career in his paintings, sketches, etchings, and frescoes. It seems that the same ailment that culminated in his deafness was responsible for the turnaround in the mood of his paintings. As previously described, Goya was a guarded man who barely let his thoughts slip, and he also had a penchant for being satirical, as reflected in his paintings. He remains an essential historical painter today. You can check paintings by artist Francisco Goya by searching the internet.